Saturday, November 19
Meeting Summary
RCAC Meeting Notes
Prior to the beginning of solo play, the following announcements were made:

1)Fran Maddox welcomed first-time guest Paul Smith as well as James Thomas, who has visited the club in the past.

2)Fran reminded players of the Dropbox link that she sends to members. New songs for music circle are accessed via the       Dropbox link. She noted that some players have asked for new music, which has been provided via Dropbox for recent monthly music circles. Since many participants are not accessing the new music, the regular music will be used in future musical circles.

3)There will be some playing along and singing at the December 17 meeting, but members can play solos as they choose. Members can access the Christmas book on Dropbox.4) At the last meeting, Fran announced that she was compiling a list of members who are available for hire to play out. She has received information from various members and this has been added to the website​.

6) Fran noted annual dues of $25 will become due in January for 2023. Payments can be made to Sue Schwab electronically, via regular mail or in person.
7) Delette Huffman reported that plans for 2023 camp are on track and there are just a few spots open.
8) Marlene Meissner noted she received all the music previously owned by Pat Dalen, who recently passed away, and it is available at this meeting. Members can make donations to the club for any music they wish to take.
The following members performed solo numbers:
Wayne Tiusanen: P. S. I Love You, Even The Nights Are Better
Kim Nurmi: Remembering a Village, Metzkukkiaakyne
Delette Huffman: Grtanzl, My Mother is a Vienna Girl
Lynn Haldeman: Lean On Me, Joy To The World
Bobbie Ferrero: Slovenian folk song, Emma
James Thomas: Bach Chorale, Jamaica
Bob Noel: Apples Peaches Pumpkin Pie, Tuxedo Junction
Paul Smith: Wave, Skinny’s Polka
Leonard Kosatka: El Choclo, La Cumparsita
John Mohney: Love Theme from Cinema Paradisio, Limonaire En Fete 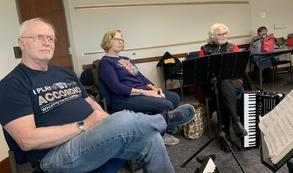 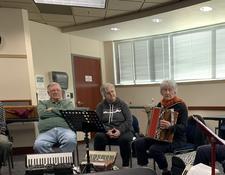 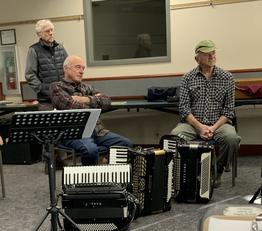 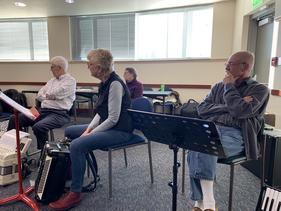